Steampunk: The New Kid on the Genre Block

So you thought paranormal romance was hot? Clearly you haven’t read steampunk. So many people ask me what it is that I think a post or two on the topic is in order. In fact, I am dedicating all of December to steampunk. From books to film to fashion, steampunk is the new cool when it comes to the speculative fiction genre!

So what is steampunk? 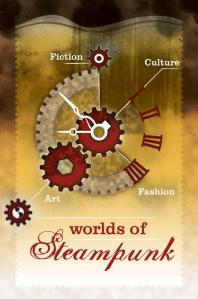 Steampunk.com handily gives us a definition:

“To me, Steampunk has always been first and foremost a literary genre, or least a subgenre of science fiction and fantasy that includes social or technological aspects of the 19th century (the steam) usually with some deconstruction of, reimagining of, or rebellion against parts of it (the punk).”

The writer goes on to say that steampunk has expanded out as a genre to include fashion, music, film, tv and even house design. They also point to an issue within the steampunk genre- that sometimes the ‘philosophy’ of steampunk can praise empire and gloss over its bad aspects in writing an alternative history. In other words, by rewriting history, even in fiction, silences around things such as slavery, child labour, gender inequality and imperialism are created.

The rest of the article is quite good and you can read it here:

But let’s have another definition for good measure- this time from urban dictionary. For them steampunk is;

“A subgenre of speculative fiction, usually set in an anachronistic Victorian or quasi-Victorian alternate history setting. It could be described by the slogan “What the past would look like if the future had happened sooner.” It includes fiction with science fiction, fantasy or horror themes.”

A much less illuminating definition but still helpful!

So what are some contemporary examples of steampunk? Well the Robert Downy Jr. Sherlock Holmes films for starters, Emilie Autumn’s entire ‘brand’ but especially her music in both Opheliac and Fight Like a Girl (she describes her music as Victorian Industrial), her book, The Asylum for Wayward Victorian Girls in the Emily sections and her fashion approach, the bestselling Protectorate books by Gail Carriger (which combine paranormal happenings with steampunk and romance), in Australia books by Richard Harland and Michael Pryor, and if you wanted to get really close to home, a lot of the fashion of the British thespian actress, Helena Bonham Carter, are also steampunk inspired.

Steampunk is everywhere these days! It is fun and inspired and fresh. It isn’t without its pitfalls but it is definitely a genre to watch!

3 Responses to Steampunk: The New Kid on the Genre Block