The Hobbit: An Unexpected Journey

By now most nerds worth their ‘nerdier than thou’ badges will have seen this film. Is the first part of The Hobbit worthy of the accolade of Star Wars prequel level awful (which by the way isn’t that bad in my opinion as I shamelessly enjoyed Attack of the Clones and happen to think that Revenge of the Sith was a borderline masterpiece film) or is it better than Lord of the Rings because of its light hearted tone? Does the film merit three hours and two more films to tell its tale or is it a shameless Hollywood gimmick geared at grabbing more out of our wallets?

The Hobbit: An Unexpected Journey tells the story of Bilbo Baggins; a hobbit who ventures out of his comforting hobbit hole in the company of a wizard, dwarves (and without his pocket handkerchief!) to face a dragon in the enigmatic role of ‘burgler’ to reclaim dwarf gold. Alongside this deceptively selfish quest, Gandalf, Radagast the Brown, Saruman, Elrond and Galadrial fear the rise of the dreaded Necromancer, the witch king of Angmar (Sauron voiced by the increasingly more popular and ever brilliant Benedict Cumberbatch of BBC Sherlock fame) so that perhaps Thorin’s quest to reclaim dwarf gold is less selfish than first assumed. 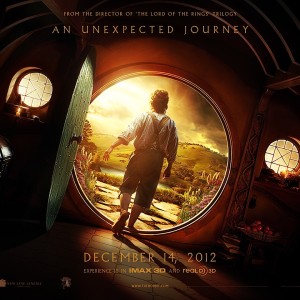 Why? I like what Jackson has attempted to do with merging the stories of The Silmarillion with The Hobbit. It serves as a good prelude to the events of Lord of the Rings. The problem with this choice is that the film moves too far away from Bilbo (Martin Freeman also of Sherlock fame but this time as sidekick Watson) and aside from the beginning of the film in Bilbo’s hobbit hole and the riddle in the dark sequence, the core of the film becomes Thorin’s anger about the elves or the doings of wizards.

I also thought that some of the liberties taken from book to film were unnecessary. Why change the way that the trolls turn to stone when it was excellent in the first place in the book? Why change the way that the goblins on their wargs trap and taunt the party from the chapter ‘Out of the Frying Pan and into the Fire’? There is no earthly reason to do so dramatically or thematically so why bother? I didn’t like the way the goblins looked, especially the goblin king. Creatures looked less naturalistic than they did in Lord of the Rings which I found distracting in places. Shore’s score was largely recycled from Lord of the Rings which I also found a bit flat and distracting.

Despite these issues with the film, I didn’t hate it. Not by a long shot. It bears remembering that Jackson’s initial trilogy is a cinematic masterpiece- widely considered to be amongst the top 100 films ever made and definitely three of the best speculative fiction films ever made. The Hobbit was always going to be anti-climatic because its story simply doesn’t have the scope of Lord of the Rings to start with.

Factoring that in, I loved that Jackson had Bilbo recite the first line of The Hobbit; “In a hole in the ground there lived a hobbit. Not a nasty, dirty, wet hole, filled with the ends of worms and an oozy smell, nor yet a dry, bare, sandy hole with nothing in it to sit down on or to eat: it was a hobbit-hole, and that means comfort.” I got a fannish shiver down my spine of utter delight. I loved Freeman as Bilbo. I think he was brilliant and hope that he gets more of a chance to shine in the next two films. I loved the bitter despair of Richard Armitage’s Thorin. I loved that Jackson transferred songs from the book to film with the help of Shore. Personally I would have disowned him if he had left out ‘Carefully, Carefully with the Plates’ and the dwarves rendition of ‘The Misty Mountains Cold’ was truly beautiful. I loved the entire reappearance of Gollum and the riddles in the dark sequence through to the claiming of the one ring.

There was a masterpiece film somewhere in here. Some scenes were utterly brilliant but the rest of the film was merely good. Which ironically, is still an enormous achievement however you look at it. The three hours breezed by and I still had a great time with the characters. It’s just that The Hobbit is no Lord of the Rings. But hey, we all knew that that was a foregone conclusion before The Hobbit even hit cinemas, right?

2 Responses to The Hobbit: An Unexpected Journey