And The Ten Times Spooks Got It Right…

Last week, I wrote a blog post listing 10 times where I felt Spooks had lost its way in its ten series run. Here is my promised ten great Spooks choices write-up. I have tried to distribute the love evenly across series though my favourite Spooks series (as made clear in the previous post) were Series 1-4 and 7.

Despite my previous post’s disclaimer, one person did get miffed at my criticisms of the show feeling that I was complaining for complaints sake and trying to prove that the whole show had failed. That wasn’t what I was doing at all. I subscribe to the view that my fave can be problematic. Spooks was one of my faves. It was also very problematic. Take Agatha Christie. I’ve read all of Agatha Christie, including the biographies and the Mary Westmacott. It doesn’t mean that some of her books aren’t incomprehensible drivel and/or classist and racist and anti-semitic. I am still an Agatha Christie fan even as I acknowledge these flaws in her body of work. To say otherwise is plain wrong. So let’s make this clear once and for all. All of my criticisms on this blog come from a place of love and a belief that art does and should drive a personal response, good or bad. Make of that what you will, dear reader…

1. Spooks introduced us to some great lesser known actors

I first discovered Spooks when my Mum and I needed a quick fix for Keeley Hawes withdrawals after Series 2 of Ashes to Ashes finished airing. Not only did we discover a young Keeley, we also discovered such lesser known silver screen actors as Matthew McFayden, Jenny Agutter, David Oyelowo, Nicola Walker (especially Nicola Walker), Hugh Simon, Hermione Norris, Miranda Raison, Gemma Jones and Raza Jaffrey. Time and time again, the show renewed itself with strong character actors who made even the silly seem somewhat believable. Though some of these excellent drama actors were given less to work with than others (poor Miranda!), all of them had stand out moments.

This was a trend that continued all of the way through from series 1 to series 10. To make a complete list would take me forever as there were often several a series, but some stand outs included Kevin R McNally as an abusive and violent racist, Hugh Laurie as a sardonic MI6 Head, Alexander Siddig as a defector with compassion and heart (a strong contender for best ever guest performance on Spooks), Anna “duckface” Chancellor as Juliet in s4 and 5, Robert Glenister as a Home Secretary with political acumen and moral conviction, Iain Glen as Lucas’ confessor and unraveller in Series 9 (even if nothing else about this storyline made sense, for the longest of times Iain did his best to hold it together) to Jonathan Hyde and Alice Krige as Ilya and Elena Gavrik respectively as well as Martha Forde, the best guest star example of the unwitting civilian dragged into secrecy against their will for the greater good, played by Lydia Leonard (who was also excellent in Ashes to Ashes as a left wing workers rights protester). There really are many more and too many list, but these immediately spring to mind as I type this.

3. Spooks had some Powerful Character Moments

Who knew that a show about melancholy spies could be so Shakespearean in its tragedy and so beautiful in its moments of compelling humanity? Though I said in my previous post that some series were better than others at developing character and character moments, all of the series had at least one moment that hooked me. I’ve picked my favorites from each series for the sake of finishing this post before tomorrow. Series 1 had many wonderful moments, though two stick out for me: Tom slipping the fake ring off his finger as he silently mourned Helen and Tessa sitting in her room after Johnny Marks has left her the data disc, just sitting and thinking and saying nothing at all, but her eyes speaking loud for her. Series 2 has too many to count, but Danny and Zoe drinking vodka out of a teapot has always been one of my favorite moments, as was Ruth stabbing scissors in the wall only to be told by Tom that when the lights come back on she’ll be the most important person in the room. Finally, who can talk about character moments without mentioning Tom wading into the ocean and Ruth sobbing and Danny and Zoe just contemplating the ocean line to Jenny Muskett’s beautiful Hold Me Tight. Series 3 is a strong contest between two moments in 3.5: Zoe trying not to succumb to morning sickness as she and Danny must kill their first man and Ruth stalking a man at his choir with Malcolm walking in on her watching a sad romance film. Series 4 had a lot of wonderful Ruth moments including “Can I hit him again, Adam?” but it was her lies in 4.10 amid claims of ‘born spook’ that sticks in my mind the most. Series 5 isn’t one of my favorites, but the entire hotel episode was excellent and Ros in particular has some great moments, though best moment of the series goes hands down to Zaf who promises Ruth after she’s been burnt from the Grid that he’ll smile at all of the pretty girls in memory of her.

Series 6 I’d be surprised if everyone didn’t mention Jo, the Redbacks and “It’s just what they do to women they capture.” Series 7 has a number of great character moments, but my money is on Jo running till her feet are bloody and Harry contemplating to classical music as glass crashes around him. Series 8, there is only one real contender with Ruth’s return and George’s death, with Ruth’s hysteria one of the most difficult things I’ve ever viewed on TV, though Ros exits with dignity in 8.8. Series 9 and 10, moments are fewer on the ground, though kudos to the writers for Ruth’s “I can’t feel” line in 9.7 and Ilya’s grave but truthful “What do you have? I have a wife and a son and a tortoise in the garden” Harry rebuttal in 10.5. He was the original Spook and one of the best. Tom’s story line was melancholic, beautiful and terribly sad. First he loses Ellie and then dates some crazies before ending up with the equally beautiful and equally damaged Christine. I found Tom’s wade into the ocean thanks to internal explosion tragic yet plausible given his characterization to that point. It is also possible to see multiple moments where as a character Tom starts to come unstuck.

I’m the sort of freak who always notices musical cues in TV and film thanks to eight years on the Cazbah music program and theory lessons. Though all of Jenny’s work on Spooks was good, I can’t listen to the wonderful Hold Me Tight without feeling awash with sadness, regret and mournful pain.

6. Allowing the Ruth/Harry slow burn to march on unscripted

I first noticed Ruth mid way through Series 2, and really started to buy into her character in series 3. I first started noticing her properly in relation to Harry. It was never originally scripted or planned, but the romance angle played out covertly by Nicola Walker and Peter Firth proved to be a valuable asset to the show, giving us a break from angst, sadness and trauma with a small side show of old fashioned British stiff upper lip romance. Many may not have liked where Ruth was taken in relation to Harry post 8.1, but it is difficult to deny the power of the early spontaneous ship.

I acknowledge that there are many great characters on Spooks and that everyone will have their own opinion on who is best, but I find it hard to go past Ros Myers for adding a special something to later Spooks. Though predisposed to hate her thanks to an unfortunate introduction in early series 5, I soon found her sarcasm, quick quips and natural knack for leadership refreshing. By the time she exited the show in 8.8, I enjoyed her as one of the most powerful female characters I’ve ever seen depicted on TV: flawed, cold, a born leader, loyal, stubborn, sarcastic and high in Harry’s favour. Who could forget the time she stabbed someone with a fork? Brought Malcolm back a detached finger? Sat calm with blood splattered up her face? Put down Tariq, voicing the same thought we were all thinking, how had someone so young got into service? Series 9 was poorer for its lack of Ros.

One of the only good aspects of Series 6 aside from Ros Myers was the introduction of Spy!gran aka Connie James played by the wonderful Gemma Jones (a fond character nod to Connie from Tinker, Tailor, Soldier, Spy). From the moment she sprayed perfume about after a hard swig of alcohol, to the moment she spoke rough and blunt to Harry, I loved her. The reveal in Series 7 pushes the series into one of the best series Spooks ever made. I still get shivers remembering the cold way Connie slitted Ben’s throat with bra wire and hissed at Harry citing ‘tick tock’ goes the clock to put the team on edge. She was a wonderful character who filled the void left by Ruth in Series 5. Which leads me to…

I’m not joking. I don’t know what the writers went on between Series 6 and 7, but the two are completely different beasts. Series 6 was so bad I almost gave up on the show, while Series 7 ranks up there as the best thing Spooks ever did. Suddenly writers remembered to write characterization again, Jo’s rape wasn’t brushed under the carpet, Connie was excellent, Ros acted effectively as Section Head, displaying far better chemistry with newcomer Lucas North (Richard Armitage) than she ever did with Adam Carter, Richard Armitage had a great back story around Russia and the plot twists came thick and fast. Also, the beginning of the adage, ‘it iz alwayz ze Russians.’ Finally, who doesn’t love some Le Carre homage. 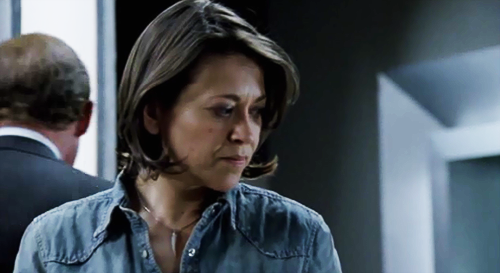 It was the character development I didn’t even know I wanted till I got it! I was one of those who felt that teasing out Ruth’s story line separate to Harry’s was a good move and it was one of the only aspects of s9 that I liked. I loved her shock return in 8.1, calculated to be one of the most brutal possible, and I swear that Nicola was a much better actress post pregnancy. Her scenes in 8.1 and 9.7 and 8 in particular stand out. I also agree with other fans that her scenes with Lucas in 9.8 were the only well played parts in the whole finale and were so good for a few seconds they almost sold me the Lucas is John reality. Almost. Besides, I liked the nifty parallel between Ruth crying over Tom in 2.10 and Ruth crying over Lucas in 9.8

9 Responses to And The Ten Times Spooks Got It Right…